A Bilborough College student is following in the footsteps of a string of famous graduates after securing a place at a prestigious London drama school.

Grace Hodgett Young was thrilled to learn she had an offer from Mountview, in Peckham, which counts Amanda Holden, Ken Stott, Sharon Small and Happy Valley, Shameless and Thin Blue line star Mina Anwar among its alumni.

In order to keep her dream of attending alive, Grace has launched a fundraising campaign to help her foot the £14,700 a year tuition bill and £9,000 a year accommodation fees.

Grace is currently studying a BTEC in Performing Arts at Bilborough College and will be taking a three-year BA Hons Performance (Musical Theatre) at Mountview.

The 18-year-old, of Arnold, started performing with Spotlight Theatre in Nottingham when she was just nine-years-old.

She said: “I also have an offer from Liverpool and although I am very grateful I think London is the place to be. I did my audition for Mountview in Birmingham and I had to do a virtual callback. The deadline to find out whether I had a place had passed and I hadn’t heard anything so I thought I hadn’t got in but the Principal rang me and told me I had a place. I cried as I 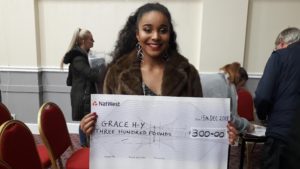 had it in my head that they were going to say no. We’ve managed to raise £7,000 so far and that’s mainly been through family and friends. It’s difficult as if this was normal times I would have been able to do much more fundraising.”

Her mum Emma said she was thrilled that Grace had been offered a place at Mountview.

Grace is used to appearing on stage having performed roles at Nottingham Playhouse in Sister Act and in Hairspray at the Theatre Royal.

Sharon MacInnes, Head of Faculty for Creative and Performing Arts at Bilborough College, said: “Grace is an exceptionally talented triple threat performer. Mountview is the idea place for her to train and launch her career into the industry. It was an absolute pleasure to work with Grace and I hope that she is able to raise sufficient funds to take up this amazing opportunity.”