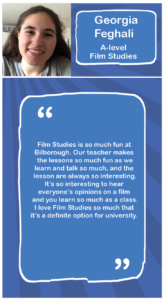 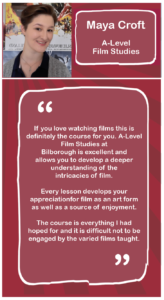 You don’t need GCSE in either Film Studies or Media Studies to take the subject at A Level at Bilborough Sixth Form College but you will need creativity, imagination, an ability to write well and, most importantly, a real interest in and love of films.

We follow the Eduqas specification. The course is assessed through a mixture of exams and written coursework and you study a wide range of texts from early silent films to more familiar, recently released, works. The course focusses on a number of key areas including: how films are made (especially their technical construction and aesthetics), the history of film, how audiences respond to films and why they react as they do and the impact that key figures have had on the development of film.

To study Film Studies at Bilborough, you need GCSE English Language grade 5 and grade 4 in Maths GCSE. If you have taken Media Studies at GCSE we would also expect a grade 5 in that subject. However, by far the most important requirement is that you love films.

Lots of students combine this subject with A Level Media Studies or if you want a more practical option you could take the new BTEC Extended Certificate in Creative Digital Media; universities are happy to accept both qualifications with A Level Film Studies.

Our links with HE

Our students go on to a variety of university courses, including Film Studies, Media Studies, Media & Film Production, Journalism, English Literature, Drama, Modern Languages, Biology, Law and Engineering. However, many of the students go on to study film related subjects at top universities and are working in a variety of roles in film promotion, distribution and marketing, film production, animation and film journalism.

Component 1: Varieties of film and filmmaking

For this unit you will study 6 feature length British & American films from the 1930s to the modern day. You will consider the ways in which Hollywood has changed and whether independent US films offer an alternative to more mainstream texts. You will also study two recent UK films and analyse how they are made and what they say about contemporary Britain.

For this unit you will study 5 very different feature length films. Two are non-English language films, one European and one from outside of Europe, there is a documentary film, a 1920s silent film and, finally, a film that could be seen as “experimental.”

This is the coursework unit and it gives you the opportunity to plan and write a screenplay for a short film. You will learn how to plan, structure and format a screenplay and consider how to develop characters, set up a narrative and bring it to a satisfying conclusion. You will also storyboard a section of your screenplay. As part of your preparation you will analyse a range of short films and consider how they work.

We run cinema trips throughout the year and many students participate in the excellent courses and workshops run by the BFI.