Students at Bilborough College aired their views on Brexit as part of a regional campaign to ensure that young people’s voices are heard as part of the negotiations.

Nonsuch Theatre Company, based in Nottingham, visited the college to hear what students had to say about Brexit during a series of workshops as part of the Undivided campaign.

Following the discussions, students’ views will be digitally submitted and will contribute to a list of top 10 demands from young people which will then be presented to Parliament.

Olivia Wheeler, community programme co-ordinator for Nonsuch, said she had been impressed with the Bilborough College students.

She said: “The debates at Bilborough were great, they were extremely lively. It is now more important than ever that young people should have a say in what happens next for our country and we are looking to capture the views of one million young people by visiting schools, colleges and youth settings across the East Midlands.

“Once we have heard enough voices, we will offer young people a means of voting on the top demands – which could include retaining free movement or keeping the NHS free – that we should put to politicians in the Brexit negotiations.

“We will then work with partner organisations to make sure we have a seat at the table in the negotiations and make young people’s voices heard.” 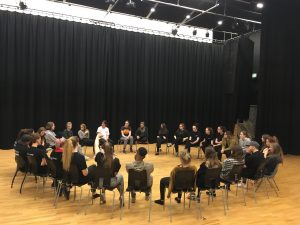 Biborough College students Nathan Lee, 17, of Derby, and Liv Whittaker, 18, of Mansfield took part in a debate about Brexit and the repercussions of leaving the EU.

Nathan said: “I think we feel like we haven’t had a chance to have our say yet and these changes will affect our lives. We want to know in simple terms what Brexit means.

“People think we don’t know what we are taking about but we are very aware, we are aware of debt, the credit crunch, immigration and I definitely think that young people should have more of a say.

“The focus so far seems to have been immigration in negative terms but for us being surrounded by other cultures is a way of life.”

Liv said: “I think that there needs to be improved awareness of the issues surrounding Brexit because people just seem to focus on immigration but they don’t know how the restriction of free movement would affect trade with other countries.

“I also think that young people’s views are not valued as much because people think we haven’t lived our lives yet. I think Brexit will have the biggest effect on our generation so we should have our say. We have lived more excessive lives than the older generation would have done at our age, we have been exposed to much more.”

Chris Bradford, Principal at Bilborough College, said: “Our students are the generation whose lives will be impacted the most by what was a momentous decision to leave the EU and yet they didn’t have any say at the referendum. It’s really important that they have this opportunity to debate the issues, to help define what Brexit really does mean and to influence what happens next. I’m encouraged to see that they’ve been grabbing the chance with both hands.”