Students from Bilborough College are waiting to find out if they have made it to the national final of this year’s UK Senior Team Maths Challenge trophy.

Sebastian Wright, Charlotte Jones, James Goodliffe and Liam Holland finished second in the regional final, which was held at the University of Nottingham and run jointly by the UK Mathematics Trust and the Further Maths Support Network.

The team that finished first goes through to the national final but judges told the team from Bilborough College that they will be informed soon if they have done enough to secure a place at the event. 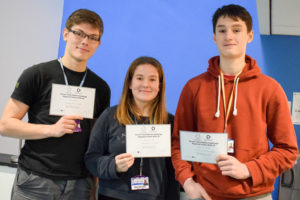 The Senior Maths Team Challenge is a competition giving students the opportunity to tackle a variety of engaging mathematical activities while developing teamwork and communication skills.

Teams of four students from schools and colleges across the UK take part in dozens of regional finals and high-scoring teams are invited to compete in the national final.

In the regional final, students competed to solve: a set of 10 timed questions as a group; a mathematical crossword or crossnumber with two members of the team working on the down clues and two on the across; a relay race where answers from one question are needed to solve the next.

The national final has the same rounds as the regional finals with the addition of a different style of relay and poster competition.

Glenda Taylor, Maths teacher at Bilborough College, said she was extremely proud of the students.

She said: “We start off by holding an internal test at the college and maths students can volunteer to take part. We then invited the top two in Year 12 and Year 13 to join the team that represents us at the regional final. There were 20 teams competing from a large area so finishing second was a great result. We are extremely proud of the students who took part and we are just keeping our fingers crossed now and waiting to find out if we have made it to the national final.”

Liam is studying A-levels in Maths, Physics and Chemistry and has received an offer from Cambridge to study Natural Sciences.

He said: “I thought it was fun. It was hard but that’s the point of it. I felt like I pulled my weight and I liked working in a team; I think I preferred it to working on my own. I thought we’d probably finish around 4th so I was really surprised that we were second, that was quite nice.”

Last year, students from Bilborough College made it to the national final and finished 36th out of almost 1,000.