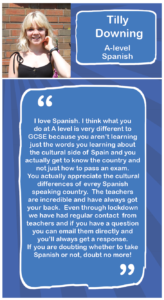 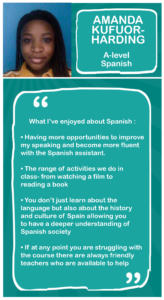 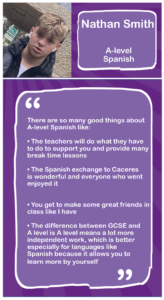 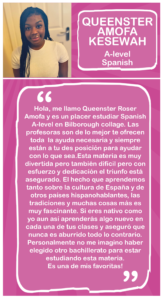 Why learn Spanish? As the second most spoken language in the world, with around 400 million speakers, it will give you greater geographical mobility. Not only is Spain one of the UK’s major trading partners and a favourite holiday destination for UK tourists, learning Spanish will help you unlock opportunities and access other cultures. Through learning the language you will be able to truly understand the finer detail of Hispanic culture evident in music, fashion and sports.

With only five vowel sounds, there is a direct correspondence between spoken and written forms and we see our students rapidly gaining confidence in the language and soon able to speak Spanish with impressive fluency.

To study Spanish at Bilborough, you need a minimum grade 4 in Maths and 5 in English Language GCSE, and more importantly, a minimum higher tier grade 6 in Spanish.

Our links with HE

Many of our students go on to study Spanish at university, either as single honours or in combination with another subject. It’s a strong career choice, with recent research by the British Council in Spain showing evidence of a dynamic and varied range of cooperation between the two countries. Given the social, economic and political impact of English and Spanish, there is clear motivation for both UK and Spanish universities to embrace collaboration and reinforce current ties. On top of this, Spanish is becoming increasingly popular with students in the UK and vice versa with Spanish students wanting to study in the UK. And despite current economic difficulties, Spain remains a highly competitive economy and shares important commercial links with the UK. The latter receives 6.5 per cent of Spanish exports and provides 6.5 per cent of overall Spanish imports – the second largest investor over the past decade.

For A level Spanish course we follow the Eduqas exam board and this course provides a transition from GCSE, improving your fluency and confidence in Spanish. Topics include ‘Families and Citizenship’, ‘Youth Trends and Personal Identity’, ‘Education and Employment Opportunities’, ‘Regional Culture and Heritage’ and ‘Media, Art, Film and Music’. You will also explore your own individual interests through Spanish film and literature as we’ll study some fantastic Spanish films and even read a book in the language to really give you a feel for the language and the culture.

As well as four and a half hours of formal teaching a week you will have 20 minutes with our Spanish assistant to help boost your confidence in speaking Spanish. You will also be invited to take part in our work experience exchange to Cáceres in south western Spain, with its UNESCO World Heritage walled city. This means staying with a local family and undertaking a work placement – usually in a nursery or primary school. You will get the chance to visit Salamanca and the world famous university as well as having the possibility to visit other cultural sites, such as an excursion to the National Park of Monfragüe, home of the Iberian lynx and the black vulture.

Adam studied both Spanish and French for A-level at Bilborough Sixth Form College and went on to do a degree in Spanish and French. He spent a year in Spain as part of his course as well as exploring Latin America after he got his degree. He’s now a trainee underwriter with a branch of Lloyds of London, using his Spanish to help decide the risks of insuring works of art from Spain and Latin America. Adam says: “Having no prior experience in either finance or fine art, being able to speak languages was the best thing for me on my CV”.